Back to News Release Search 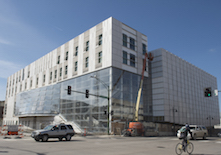 The University of Iowa (UI) School of Music in Iowa City celebrateed its 110th anniversary and a new home – Voxman Music Building. The grand opening and ribbon-cutting event was held on Oct. 21, 2016. The 190,000-square-foot facility replaces its former location, which was damaged by the 2008 flood. Designed for resiliency, sustainability and the highest acoustic performance, the $152 million project is targeting LEED® for New Construction Gold certification. Wausau Window and Wall Systems worked closely with glazing contractor Architectural Wall Systems (AWS) to achieve the design intent set by LMN Architects and Neumann Monson Architects.

David Gier is the first to serve as the UI School of Music’s director in the Voxman Music Building. The facility’s name honors one of his predecessors, the late clarinetist Himie Voxman who served as the school’s director from 1954-1980. Gier and the School of Music have eagerly awaited their new home.

Supporting LMN Architects and Neumann Monson, Mortenson Construction served as the construction manager agent for the University. Programming and schematic design began in 2011. In 2014, the new building’s essential structure was completed and the building envelope could begin taking shape.

“We conceived the project as a means of extending the public space inside the building, and we do that with glass. We start beneath the concert hall and wrap the glass exterior around and up to the main entrance, continuing over the recital hall and reaching heights of 50 feet,” described LMN partner and project designer, Stephen Van Dyck, AIA, LEED® AP. “The window systems play a huge part in creating the visual transparency between the public and the performers, and the connection from within and without of this educational and cultural building.”

He noted, “One of the building’s most unique, recognizable features is the shingled curtainwall overlaying the recital hall.” Called the “warped wall” by some, this sturdy construction of glass and metal units are layered to create an undulating slope that appears to gently pour from the building’s roof to its base.

“Almost every room is acoustically isolated,” explained Van Dyck. “This means that instead of the usual one wall, one floor between each room, there are two or three walls and two floors to separate most of the rooms and keep sound from transferring between them. We’re also trying to keep the sound from passing from the outside into the building’s interior. The windows are a big part of that equation.”

He continued, “Due to the acoustic challenges they can present, it’s very rare to have large window views and a plentiful amount of natural light in performance and rehearsal spaces. The glass has a critical part. We choose a low-iron glass for the transparency and specified low roller wave and horizontal orientation to minimize visual and acoustic distortion. On the shingled wall, we use very large panes of glass. They are not co-planar and diffuse sound at different rates.” The rooms within the building are each optimized to deliver the necessary acoustic experience.

“The acoustic requirements for this project are of utmost relevance,” emphasized Chucho Loria, AIA, with Neumann Monson Architects. “Wausau’s team looked at the various conditions in the project. They developed details, during the shop drawing review process, to ensure that their system would meet the design intent of the project. It was apparent in those details that Wausau was taking efforts to make their system interact with the rest of the building.”

“We prefer an integrated, whole building approach – especially with complicated engineered projects,” said Chad Walter, Wausau’s regional sales representative. “Our systems may be just one part of that whole, but everything must work together to successfully deliver the architectural vision and critical functionality.”

Lee Ebel, project manager at AWS, agreed, “This was an extremely complex and hard build that required everyone’s full attention to ensure that the project went as smooth as it possibly could. AWS installed the curtainwall and window systems, as well as the “twisted” terra cotta panels that clad the façade.

“Almost all of the job was acoustically sensitive,” reiterated Ebel. “Wausau produced and had tested units that verified the system would meet the necessary STC ratings at the corresponding frequency.” Sound Transmission Class (STC) is a single-number rating system for acoustical performance, where a higher number indicates better performance. The Voxman Music Building’s design specified an STC 55, which is suitable for blocking loud noises including musical instruments.

Adding glazing mass, increasing air space and improving damping by the addition of a laminated interlayer achieve improvement in acoustical performance. Of course, maintaining an airtight assembly to reduce “flanking” noise is critical, especially at high frequency. All three approaches were used to meet the acoustic requirements of the Voxman Music Building.

“The goal was to have virtually no outside noise in the recital hall,” said Randy Arneson, Wausau’s senior estimator on the project. “There’s 5-inch airspace between the inside and outside glass lites of our curtainwall to decrease sound transmittance. For the majority, we used Viracon’s 1-5/16-inch OptiWhite laminated, insulating, specialty glass.”

In the concert hall, Arneson noted that Viracon’s glass was glazed into the window system’s interior-facing plane with a 3-inch airspace and on the exterior-facing plane, electrochromic SageGlass was installed. Electrochromic (EC) glass darkens or clears when a low-voltage DC current is applied. Wausau incorporated the necessary wiring paths to connect the windows’ EC glass with a user-controlled switch. This enhanced functionality allows the faculty and students to reversibly control the sunlight entering their space and to maintain their outside view without shades or blinds.

“Wausau provided these elegant, tall, thin windows with EC glass. They’re really cool. When the windows are turned ‘on’ and tinted, they produce this really nice, diffused light,” said Van Dyck. “They’re very narrow – some are only 1 foot wide, but 40 feet tall. The smaller span actually helps with the acoustics. The stiffer it is, the less it wants to vibrate.”

Ebel added, “The typical LEED requirements applied to this project.” The window systems’ high performance features contribute to quiet, comfortable spaces that promote concentration and creativity, as well as a whole building approach to energy-efficiency, daylighting and outside views. The aluminum framing members of the window system were manufactured with recycled content and finished in clear anodize. At the end of its useful life as part of a curtainwall or window systems, the anodized aluminum is 100 percent recyclable.

Contributing to the window systems’ durability and energy-efficiency, Linetec provided the anodize finish and the thermal barriers. Both Linetec and Wausau are considered local suppliers, as they are located within a 500-mile radius of the UI campus. Ebel emphasized, “It took a lot of coordination between all parties, and modeling of the curtainwall and structure to ensure that everything would fit correctly in the field once installation started.”

AWS installed Wausau’s SuperWall™ curtainwall, custom-engineered fixed and operable windows, and nearly 23,000 square feet of INvision™ 1050i-UW Series unitized curtainwall. Glazing and sealing in a factory-controlled environmental ensures that conditions are maintained to achieve the intended performance required for the project. Shipped one lite wide by one floor tall, the interlocking, pre-assembled units make the system easy to install on the job site. This saves labor, time and associated costs.

The curtainwall and window systems’ installation was finished on time and on budget. The Voxman Music Building was substantially completed in July 2016 and welcomed its 450 music students and 60 full-time faculty on Aug. 22, 2016.


Nationally recognized for its innovative expertise, Wausau Window and Wall Systems is an industry leader in engineering window and curtainwall systems for commercial and institutional construction applications. For 60 years, Wausau has worked closely with architects, building owners and contractors to realize their vision for aesthetic beauty, sustainability and lasting value, while striving to maintain the highest level of customer service, communication and overall satisfaction. Wausau is a part of Apogee Enterprises, Inc., a publicly held, U.S. corporation.